The Rhythm Designer also provides an extensive set of arpeggio patterns for each of its instruments. These can be operated either in single shot mode or in a continuous loop, and can be used with any of the other rhythm patterns and even the OAA styles. In this next piece by Jay Livingston and Ray Evans, made famous by Doris Day, we use both the Rhythm Designer and the OAA. In the Rhythm Designer style we have a single shot harp arpeggio plus guitar and string rhythm patterns, whilst an OAA style supplies an alternative accompaniment for the third verse of the song. The arpeggios are triggered by a feature known as the Remote Octave in which we can designate any group of eight notes on the lower manual as the Remote Octave, and then have these notes linked to the Special Effects buttons. So hitting the key in the Remote Octave that corresponds to the arpeggio Special Effects button will activate the arpeggio.

The optional Rhythm Designer package offers an extensive set of instrumental and percussion rhythms patterns that can be used as individual accompaniments. Additionally, any four of these rhythm patterns can be combined together to create the tracks of a style, and any four combinations of these tracks can be used to define a set of four variations for the style. Because all of the rhythm patterns are pre-defined, the Rhythm Designer provides an easier and quicker method of creating accompaniments than the Style Record option in the Open Art Arranger (OAA) which requires each rhythm pattern to be recorded individually. As with the OAA, the instrumentation for each selected rhythm can be changed if required. The Rhythm Designer is very flexible to use, by itself it can provide a stand alone accompaniment or alternatively it can be played simultaneously with any style from the OAA.

Each of the accompaniment variations can be assigned to any of the first four Special Effects buttons and/or the four variation buttons on the console. In this first piece by Pete Seeger, made famous by Peter, Paul and Mary, we use a Rhythm Designer style for the accompaniment, switching in and out the different variations as the music progresses. The Musette featured in the third verse is from an optional World of Accordions package and the final verse employs one of the many vocal sounds available on the instrument.

Where Have All The Flowers Gone

In this next piece written and performed by ABBA, we demonstrate the continuous loop arpeggio capabilities of the Rhythm Designer. We use an OAA style throughout, adding an 8 beat then a 16 beat piano arpeggio in the last two choruses of the piece. 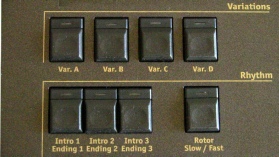