The 320 Paramount sample set is featured here, running in the Advanced Edition of Hauptwerk. This instrument will also run in the Basic Edition of Hauptwerk. A range of sample resolutions are configurable depending on how much RAM is available. The highest resolution (24 bit uncompressed) requires 3.3 GB of RAM to run both the samples and the Hauptwerk software. The 320 sample set requires 1 GB of disc space. For the installation of additional sample sets, disc capacities of between 50 GB and 400 GB are recommended. Hauptwerk specify Apple Mac systems as their preferred computing platform, and for optimum performance, reliability and sound quality, having other programs running simultaneously on the same processor is not recommended.

Although the Hauptwerk software contains both a MIDI recorder and a high quality digital audio recorder, the demos have been recorded through the normal Wersi sound system to provide an accurate representation of how these would sound on your instrument. The Hauptwerk audio recorder enables high definition 32 bit studio quality professional recordings to be made if required. The instrument’s blower noise has been disabled for the recordings, but can be easily activated if preferred. The pipes of all the Paramount models have been sampled dry, so a degree of reverberation has been added using the reverberation unit in the OAS external audio inputs system.

Give My Regards To Broadway

More information on the Paramount organs and the Hauptwerk sample sets is available at:

All the models in the Paramount Organ series are constructed from samples taken from the finest private and public theatre organs installed throughout America and the UK. The best ranks have been collected to provide the organist with unparalleled quality. All samples are in better than CD stereo audio quality with the Solo ranks emanating from the right channel and the Main ranks emanating from the left channel. Paramount models use the actual recordings of each pipe both with tremulant on and with tremulant off rather than synthesising this effect in the sample player software. This produces a much more realistic, authentic theatre organ sound. Considerable time and effort has been expended in voicing the instruments using the extensive suite of high precision tools available in the Sound Forge software. Not only have the notes within a rank been regulated, but also the various ranks have been taken together and meticulously voiced to blend into a musically satisfying ensemble. 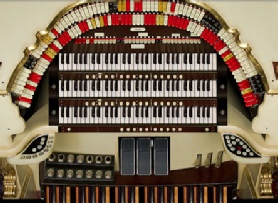 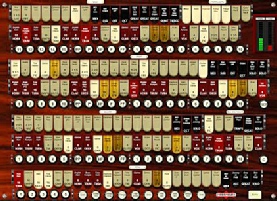 The second demo features the solo sounds of the instrument. Use is also made of the Sostenuto facility on the Great manual, controlled by a Wersi footswitch, to enable sounds to be sustained whilst moving from one keyboard to another.

The first demo showcases the ensemble sounds of the instrument, together with some of the special effects. Use is also made of the Second Touch facility on the Accompaniment manual, controlled by the Wersi Dynamic function, to bring in additional stops as required.