A number of musical instruments such as strings, guitars and trombones are able produce a glide in pitch from one note to another. This is our second type of pitch variation and is known as Portamento. On the Wersi organ this effect is available in an optional Portamento activation package which features a range of applicable instruments. The effect is produced by holding down one note whilst playing the next. In this second piece, made famous by Tony Bennett, we feature the Soft Trombone from the Portamento package at the beginning and end of the piece. The legendary Fender Rhodes electric piano is used for the introduction. The arrangement for the accompaniment has been created by the MIDI Sequence Editor using a style from the Accompaniment Unit combined with additional orchestral instruments  There will be more on creating MIDI sequences later in the Showcase.

I Left My Heart In San Francisco

Articulation is the term used to describe the various ways in which a note can be played on a musical instrument. There are many different types of articulation and these vary from instrument to instrument. A number of sounds on the Wersi organ have articulation built into the samples. For example the Marcato Strings have an accented attack, the Tremolo Strings have a continuous vibrato and the Trumpet has a delayed vibrato. For these sounds the articulation applies to every note we play. There are occasions however when we wish to apply articulation only to specific notes. A popular articulation used on a wide range of instruments is that of varying the pitch. The Wersi organ provides three types of pitch variation, the first of which is known as Pitch Bend. This is characterised by a momentary raising or lowering of the pitch, either by using the pitch wheel located on the console or by programming the Hawaii effect into one of the expression pedal footswitches. The pitch wheel enables both the degree of pitch variation and its duration to be defined, whilst the Hawaii effect provides a fixed pitch variation but its duration is programmable. Pitch Bend is used across a number of different musical genres including country, soul, jazz, blues and big band. In this sultry blues arrangement of a Hoagy Carmichael classic we use Pitch Bend successively on the Flugelhorn, Guitar, Clarinet and Trumpet. The piano countermelody in the first chorus is programmed into the style using the OAA Style Record function previously described in the Accompaniments section of the Showcase.

Georgia On My Mind

The difference in pitch between the two notes of the Portamento effect varies depending on how far apart the notes are from each other. In some instruments however we require the transition to a note to be a fixed amount, and this is Pitch Glide, our third type of pitch variation. In the second section of this final piece composed by Henry Mancini for a TV mini series we use this effect to create the characteristic sound of the Celtic Flute. On Wersi instruments there is no fixed glide effect provided, but we can programme this into any of the sounds in the sound database using the pitch modification facilities available in the optional Sound Factory activation package. There will be more on the Sound Factory later in the Showcase. The effect can be activated on any note by striking the note harder using the Dynamic control. The introduction to the piece also features an Indian Sitar, one of the many ethnic sounds available on the instrument, and listen out for the tweeting birds at the end of the piece courtesy of the Special Effects Unit !

Theme From The Thorn Birds 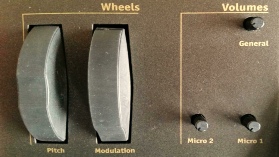