Although the Hauptwerk software contains both a MIDI recorder and a high quality digital audio recorder, the demos have been recorded through the normal Wersi sound system to provide an accurate representation of how these would sound on your instrument. The Hauptwerk audio recorder enables high definition 32 bit studio quality professional recordings to be made if required. The instrument’s blower noise has been disabled for the recordings, but can be easily activated if preferred. The pipes of the MasterWorks model have been sampled dry, so a degree of reverberation has been added using the reverberation unit in the OAS external audio inputs system.

More information on the Milan Digital Audio MasterWorks organ and its Hauptwerk sample set is available at:

The second demo features the ensemble sounds of the instrument. Use is made of the Second Touch facility on the Accompaniment manual in the final section of the piece to highlight the melody, and then the Pizzicato function to add the Post Horn.

The first demo showcases the solo sounds of the instrument. Use is made of the Second Touch facility on the Accompaniment manual, controlled by the Wersi Dynamic function, to bring in additional stops as and when required.

The MasterWorks series MW331 theatre organ from Milan Digital Audio was created to give organists the utmost realism in performing on a large scale three manual thirty one rank instrument. The organ has been constructed from samples taken from some of the finest theatre organs located around the United States of America.  Designed to the exacting requirements of world leading theatre organist Jelani Eddington, the specification and layout of the instrument are a theatre organist’s dream come true. The instrument comprises nearly 4000 high definition stereo audio samples, all with a resolution of 24 bits and a sampling rate of 48 KHz. Up to eight seamless loops per note are provided. The organ is divided into two chambers, Main and Solo, with all ranks of pipes and effects enclosed in either of these two chambers. Each chamber is controlled by a separate expression pedal. A Master expression pedal is also provided that can control both chambers simultaneously, and a 20 stage Crescendo pedal is also included. 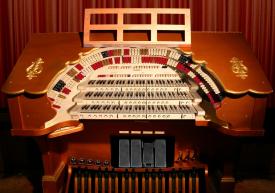 The MasterWorks theatre organ is a completely unified instrument comprising three manuals, thirty one ranks and 256 stops. A comprehensive set of user adjustable tremulants is provided together with all the standard theatre organ features. These include 2nd touch on the Accompaniment and Great manuals, sostenuto on the Great, toy counter and effects including percussion, reiteration for the Xylophone, Glockenspiel and Harp, and an authentic coupling and combination action. Special features include a Hamburg Model D Steinway piano with damper pedal action, a pizzicato function with adjustable timings and a Celeste option for flutes and strings. A comprehensive set of virtual console displays is provided comprising the original console with all controls, the Solo and Great controls, the Accompaniment and Pedal controls and a full view of all controls. All samples are recorded dry for compatibility with multi-channel audio systems and for performances in live venues. 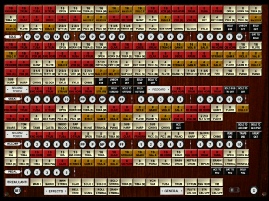 The Masterworks 331 sample is featured here running in the Advanced Edition of Hauptwerk. This instrument will also run in the Basic Edition of Hauptwerk. A range of sample resolutions are configurable depending on how much RAM is available. The highest resolution (24 bit uncompressed) requires 6 GB of RAM to run both the samples and the Hauptwerk software. The 331 sample set requires 3 GB of disc space. For the installation of additional sample sets, disc capacities of between 50 GB and 400 GB are recommended. Hauptwerk specify Apple Mac systems as their preferred computing platform, and for optimum performance, reliability and sound quality, having other programs running simultaneously on the same processor is not recommended.