Hereford Cathedral dates back to the 11th. Century and is situated in the west midlands of England, close to the border with Wales, and is the county town of Herefordshire. The county is predominantly known for its agricultural produce with many fruit orchards keeping the local cider makers in business. The cathedral itself is dedicated to two saints, Saint Mary the Virgin and Saint Ethelbert the King - the latter having been beheaded nearby in the year 792. Apart from its magnificent Henry Willis pipe organ, the cathedral is famous for housing the celebrated Mappa Mundi, the largest remaining mediaeval map of the world, which dates back to 1300. The Chained Library at Hereford Cathedral is a unique and fascinating treasure in Britain’s rich heritage of library history. There were books at Hereford Cathedral long before there was a ‘library’ in the modern sense. The cathedral also possesses one of only a small number of surviving copies of the Magna Carta, dating back to 1217, the forerunner to modern day British constitutional law. 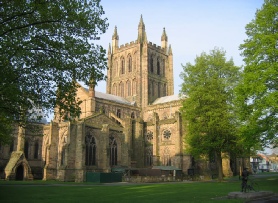 The earliest recorded instrument is one by Renatus Harris, dating from 1686. The organ underwent a major restoration in 1832 by J.C. Bishop under the auspices of Samuel Sebastian Wesley, whose extended anthem The Wilderness was first heard at the re-dedication service in November of that year. In 1861 the decision was taken to engage the services of Gray and Davidson to enlarge the organ significantly and make good various deficiencies. In 1879 Henry Willis was invited to undertake a complete restoration of the instrument, and was engaged again in 1892 for a major redesign. This is essentially the instrument we see today. It is one of the finest examples of the work of Henry (Father) Willis, England’s premier organ builder, and was the first in the country to have adjustable pistons, a Willis invention. The instrument currently comprises four manuals, a 32 note pedalboard, 67 stops and over four thousand pipes. The organ plays a key role in the liturgy of the cathedral and is home to many organ recitals and recordings. 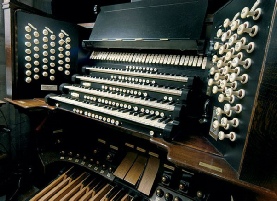 Four separate Hauptwerk samples sets are available ranging from a small evaluation set to the complete instrument set. The evaluation set provides a small subset of stops suitable for use with the Free Edition of Hauptwerk. The complete set is faithful to the organ as it exists today. It comprises all of the 67 stops and requires the Advanced Edition of Hauptwerk. The Advanced Edition also includes a comprehensive pipe voicing facility and multiple audio outputs. The latter enables the instrument to be played through a multi-channel amplifier and speaker system for maximum authenticity. Every pipe in the instrument has been individually sampled in high definition using high quality microphones by Bruel & Kjaer (now DPA) and AKG, with pre-amps and state of the art digital conversion technology by Focusrite and M-Audio. The samples incorporate the natural reverberation of the building which can be up to five seconds. Blower, tremulant, stop and key action noises are also included but can be disabled if required. 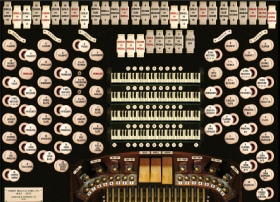 The full 67 stop sample set is used in the Wersi HD Series, running in the Advanced Edition of Hauptwerk. The latter is required for an instrument of this size. A range of sample resolutions are configurable depending on how much RAM is available. The highest resolution (24 bit uncompressed) requires 25 GB of RAM to run both the samples and the Hauptwerk software. The Hereford sample set requires 24 GB of disc space. For the installation of additional sample sets, disc capacities of between 50 GB and 400 GB are recommended. Hauptwerk specify Apple Mac systems as their preferred computing platform, and for optimum performance, reliability and sound quality, having other programs running simultaneously on the same processor is not recommended.

The demo showcases both the solo stops and the diapason chorus combinations available on the instrument. Although the Hauptwerk software contains both a MIDI recorder and a high quality digital audio recorder, the demo has been recorded through the normal Wersi sound system to provide an accurate representation of how it would sound on your instrument. The Hauptwerk audio recorder enables high definition 32 bit studio quality professional recordings to be made if required. Blower, tremulant, stop and key action noises have been disabled for the recording, but can be easily activated if preferred. No OAS reverberation has been added as the sample set incorporates the natural ambient reverberation of the building. As is often said, the best stop on the organ is the acoustics of the building!

More information on the cathedral, the organ and the Hauptwerk sample sets is available at: