Wersi keyboards are velocity sensitive so that when the Dynamic effect is activated the force applied to the keys directly controls the volume of sound that is being produced. This provides a realistic representation of how actual instruments perform. Additionally, the timbre of many instruments changes with different degrees of force, so the Wersi instrument samples also provide for a change in tonality. The Dynamic effect can be used in a variety of ways. In this second piece from the classic movie ‘Casablanca’ we demonstrate two of these. In the first section we use the Dynamic effect to add realism to the saxophone voice, and in the second section to provide a Brass sforzando on selective chords in the trombone accompaniment.

As Time Goes By

The Wersi organ provides a comprehensive range of sound processing Effects which can be added to any of the sounds in the Sound Database. Among these are Reverberation, Chorus, Dynamics and Delay. All of these provide adjustable parameters that can be programmed by the user to suit the requirements of the music. Reverberation can be applied in two ways, on the total sound to create the ambience of a variety of acoustic environments from a small intimate jazz club to a large cavernous cathedral, and on individual sounds to add depth to the soundfield. The latter is particularly useful when positioning instruments in an orchestral arrangement. The Chorus effect adds fullness to instrumental ensembles, so is particularly useful for strings, brass, choral sounds etc. In this first piece by John Williams from the movie “Saving Private Ryan” we apply both reverberation and chorus effects. Reverberation is applied to the total sound to create the ambience of a large concert hall, and individually to the trumpets to imply a sense of distance. Chorus is added to all the choral and brass registrations to create a broader, fuller sound. The percussion fade out at the end of the piece is achieved by using the Fade In/Out feature from the Accompaniment Unit which performs this operation automatically.

Hymn To The Fallen

The Dynamic effect requires a Dynamic Curve for its operation. This relates the volume of sound produced to the force applied to the keys. Wersi provide a comprehensive set of Dynamic Curves that can be individually assigned for each selected sound. This is particularly useful when sounds are layered together and we require them to behave in different ways when a key is struck. Some of the sounds in the Sound Database have this feature already built in. In this popular Latin American number by Antonio Carlos Jobim we use two of these in the middle sections of the piece, a Saxophone/Brass combination and a Muted Trumpet/Brass combination. A soft touch on the keys plays the first sound in the combination and a harder touch plays the second.

The Girl From Ipanema 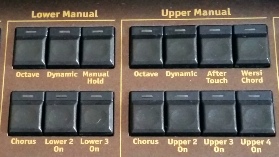 The Delay effect is similar in nature to reverberation but with a longer time interval between the original and reflected sounds such that we can actually hear an echo. Delay is used extensively in synthesiser sounds and special effects, but is also very popular with guitarists. In this orchestral arrangement of tunes made famous by The Shadows the effect is applied to the sound of the iconic Stratocaster guitar. The medley comprises ‘Wonderful Land’ followed by ‘Theme for Young Lovers’ then ‘Apache’ and finally ‘Atlantis’.