A popular addition to the Hammond Organ was the Leslie Speaker. This comprised a tweeter (high frequency speaker) inside a rotating horn at the top of a speaker cabinet and a woofer (low frequency speaker) mounted over a rotating drum at the bottom. Rotation could be at two speeds, a Chorale mode to imitate the sound of a church organ or a Tremolo mode to imitate that of a theatre organ. The Wersi organ performs this function electronically under the control of push buttons on the instrument’s console. This next piece, popularised in the 1960s by the group Procol Harum, features the OX7 unit emulating the Leslie Speaker in both Chorale and Tremolo modes.

A Whiter Shade of Pale

The classic electronic organ sound has come to be defined by that of the Hammond Organ. The unique feature of this instrument was a set of Harmonic Drawbars attached to an electro-mechanical sine wave tone generator. The drawbars enabled the player to mix these tones together at various pitches to provide literally millions of different sound combinations. The Wersi organ replicates this with an equivalent set of console drawbars and three different methods of tone generation. The first of these is the OX7 unit which generates the required sine wave tones using a dedicated Digital Signal Processor. The OX7 unit uses a graphical setup menu on the instrument’s display and push buttons on the console to provide all the features of two of the original Hammond instruments, namely the B3 and H100 models, as well as those of previous analogue and digital Wersi models. In this piece made famous by Hammond artist Ethel Smith to demonstrate the responsiveness of the electronic organ we hear the OX7 unit generating the iconic sounds of the B3.

The second method of tone generation is referred to as the OAS Drawbars (also called the Wersi Drawbars) and is essentially a set of digital sine wave samples that provide all the required pitches for the console drawbars. These samples differ tonally from those of the OX7 unit in that they are more representative of the drawbar sounds of previous Wersi instruments. A graphical setup menu on the instrument’s display is provided and all the required functions are controlled from the same set of console push buttons that are used to operate the OX7 unit. Undoubtedly the man most responsible for popularising the electronic organ in past decades was the German organist Klaus Wunderlich. He pioneered the technique of Multi Tracking which, in addition to mixing together several different organ parts, would also add to the recording a variety of other instruments such a guitars, drums and synthesisers. This next piece features a medley of tunes from the Klaus Wunderlich era using the sounds of the OX7 unit and played in his style. The Multi Tracking element is achieved using a backing track produced by the organ’s MIDI Record facility and includes instruments from an accompaniment style and additional organ parts from the OAS Drawbars. The medley comprises the French Eurovision entry ‘Love is Blue’ followed by the Tom Jones hit ‘The Green Green Grass of Home’ then the theme from the movie ‘Love Story’ and finally the Beatles classic ‘Yesterday’. 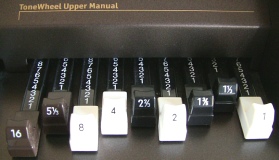 The third method of tone generation employs what is called Virtual Studio Technology (VST) developed by the Steinberg company to enable the hardware equipment used in recording studios to be emulated in its desktop / laptop sound processing software. In addition to those devices incorporated as standard, the modular construction of the software allows for a wide range of additional devices to be included. These modules are referred to as VST Plugins and can be of two types, namely Instrument and Effects. As their name suggests, Instrument Plugins will typically emulate a particular musical instrument e.g. a range of pianos whilst Effects Plugins generally provide sound processing functions e.g. reverberation. The introduction of an interface and protocol standard for software utilising VST Plugins has resulted in both a rapid expansion of plugin compatible software and a comprehensive range of VST Plugin packages. The PC based technology of Wersi instruments makes it possible to incorporate up to 4 VST Plugins on the organ, provided that they are compatible with the instrument’s software. Currently two VST Plugins are offered by the company, the VB3 and the B4, both emulating the sounds and features of the Hammond B3 model. With its fast attack and percussion effect the B3 was a particular favourite amongst jazz organists, as is demonstrated here using the sounds of the B4 Plugin in a classic Duke Ellington composition.

Don’t Get Around Much Anymore