Using the MIDI Sequencer as a multi-track recorder enables complex accompaniments to be built up track by track by recording each track individually from the keyboards. During the recording of each new track, all the existing tracks are automatically played back so that accurate timing and volume balancing can be achieved.

In this next piece composed by Stanley Myers for the movie “The Deer Hunter”, we use the MIDI Sequencer to construct a complete orchestral accompaniment. For the performance we add on the melody, string accompaniment and bass from the keyboard and pedals.

In addition to the two types of accompaniments previously considered, Styles and Rhythm Patterns, there is a third option which is provided by the instrument’s Media Player. This can play a variety of media files, of which MIDI, Wave and MP3 files are the most useful for accompaniments. Unlike Styles and Rhythm Patterns however, which typically provide a loop of only a few bars, these media files can provide the accompaniment for an entire song. In this regard it is more accurate to describe them as Backing Tracks. There is a huge number of files available in all three formats covering a wide variety of songs and musical styles. Additionally, users can create their own backing tracks using the instrument’s built-in Digital and MIDI Recorders. The Digital Recorder is a conventional audio recorder producing a single track stereo wave file from the music being played. An optional Multi-Recorder package extends this provision by enabling up to eight stereo tracks to be separately recorded and mixed together. There are no editing facilities in either of these two recorders. The MIDI Recorder uses a software package called a MIDI Sequencer to capture MIDI data as the organ is being played and then stores this in a MIDI file. Up to sixteen tracks can be recorded, and extensive editing facilities are provided in the sequencer for changing track and note data. We can either record the complete accompaniment in one go using the MIDI Recorder, or a track at a time using the MIDI Sequencer, or a combination of both.

In this first piece composed for the movie “Titanic” by Will Jennings and James Horner, we use the MIDI Recorder exclusively to record a piano backing track for the song, then play this back as an accompaniment for the performance.

My Heart Will Go On

In this next piece popularised by Buddy Holly, we use the MIDI Recorder to record a style from the Accompaniment Unit over the entire length of the song. Then we add in the remaining tracks of the orchestration using the MIDI Sequencer. As before for the performance, we add on the melody, string accompaniment and bass from the keyboards and pedals. 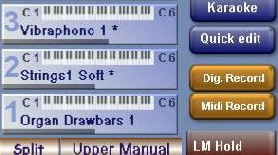 The Media Player is also able to play video files. In this application the video content is displayed on the instrument’s touchscreen. A popular application of a video file would be to simply provide a visual accompaniment for the music being played. If appropriate however, the audio in these files can also be used as an accompaniment.

In this final piece composed by Randy Newman for the movie “Toy Story 2”, we use the vocal sung on the video by Sarah McLachlan as a backing track and fill in the rest of the orchestration from the organ to provide a combined audio/video performance.

When She Loved Me

When She Loved Me

(Listen to the audio)