Another useful feature of styles is their ability to provide the backing instruments for a particular musical genre. In this next piece, the Square Dance from the musical “Oklahoma” by Rodgers and Hammerstein, we use a country style to provide the rhythm section for an orchestral arrangement of the song. The Edit Instrument feature is again used to modify the instrumentation in the style to provide the required orchestral instruments. Listen out for the finish of the song where we hear one of the style endings, and feel free to join in with the Yahoos from the Special Effects Unit!

The Farmer And The Cowman

The WERSI organ offers a comprehensive selection of accompaniments or Styles as they are more commonly known. Styles are continuously repeating rhythm sequences comprising drums, bass and a set of instruments appropriate to a particular musical genre. They derive their harmonies from the chords held down on the lower keyboard. Over the years styles have progressed from relatively simple one or two bar patterns to more elaborate rhythm sequences, some specific to particular tunes, with Variations, Intros, Endings, Breaks and Fill-Ins. Their applications range from providing the sole accompaniment for a melody at one end of the spectrum to their inclusion as an essential component of a completely integrated orchestral arrangement at the other. In the following examples we highlight the latter application since it demonstrates more of the instrument’s features and capabilities.

The accompaniment section of the instrument is implemented by a package known as the Open Art Arranger (OAA), a unique feature of which is the ability to edit the instruments, sequences and rhythms of the style, and even create entirely new accompaniments. In this first piece from the musical “Jesus Christ Superstar” by Andrew Lloyd Webber and Tim Rice we use the Edit Instrument feature to change the instrumentation in the style so that this together with the keyboard registrations now forms the complete orchestration for the song.

I Don’t Know How To Love Him

Some organists, particularly those with professional training, prefer not to use styles on the basis that their monotonous regularity limits the individuality and creativity of the performance. In truth however, no matter how competent a musician might be, there is only so much that can be achieved with two hands and two feet. A style can be very effective in providing what keyboard registrations and playing technique cannot, as in this jazz classic by Henry Creamer and Turner Layton. Here we use a style to provide all the instruments in a Dixieland jazz band, initially as backing for the individual solo improvisations, then in a later section for the complete ensemble. The Edit Sequence feature is used to modify the instrument and drum patterns in the breaks and fill-ins to better fit the construction of the song.

Way Down Yonder In New Orleans 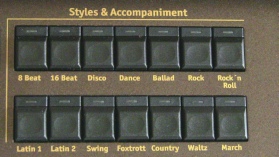 As well as the facility to change the instrumentation and sequences in a style, the OAA also provides a Style Record facility to create entirely new styles by enabling the drum, bass and instrument parts to be specified and recorded individually from the keyboard. This process is especially useful if a particularly unique arrangement is required, as in this final piece by Ravel where the orchestration is quite specific to the music. Here we use the Style Record feature to create four variations of a style, each one becoming more elaborate as the piece progresses, and also a suitable ending for a crash, bang, wallop finish!